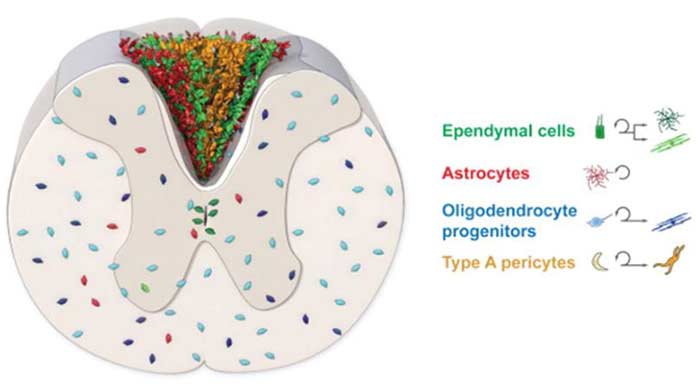 In an advance in treating spinal cord injuries, researchers have pinpointed nerve cells that are key to allowing people with paralysis to walk again.
The findings come, in part, from nine patients involved in an ongoing Swiss study that is seeking to restore movement to people with paralysis.
All nine rapidly regained the ability to stand and walk with the help of implants that electrically stimulate spinal nerves that control lower-body movement.
Now the researchers are reporting that they’ve identified a specific group of cells in the lower spine that appear necessary for that movement recovery to happen.
The hope, experts said, is that the discovery will help in refining the electrical stimulation therapy — and, eventually, aid in developing even more sophisticated ways to restore complex movement to people with paralysis.
In the United States alone, as many as 450,000 people are living with a spinal cord injury, according to the American Association of Neurological Surgeons. Just over half of those injuries are in people younger than 30, most of whom are male — with traffic accidents or violence often to blame.
Spinal cord injuries essentially cut off communication between the brain and the spinal nerves located below the level of the injury.
But those nerve cells are not useless — just offline. And for years, researchers have been studying epidural electrical stimulation (EES) as a way to get those neurons firing and restore some amount of movement to people with paralysis.
EES involves implanting electrodes that deliver electrical currents to neurons in the spinal cord. The electrodes are connected to a pulse generator implanted in the abdomen.
EES has a 50-year history of use as a treatment for pain, said Eiman Azim, a researcher at the Salk Institute in La Jolla, Calif., who studies the mechanisms underlying human movement.
Along the way, researchers realized EES also affects movement. Over the past decade or so, different research teams have used EES, along with intensive physical rehabilitation, to help a small number of paralyzed patients regain the ability to stand and walk to some degree.
The Swiss team, Azim said, has been “making big leaps” in advancing the approach in recent years.
They have developed, for example, electrodes that precisely target the “dorsal root” regions of the spinal cord that control leg and trunk movement. They’ve also incorporated sophisticated technology that stimulates nerves in a pattern that better emulates the way the brain would do the job.
The team, from the Swiss Federal Institute of Technology and the University of Lausanne, reported on their three latest patients earlier this year. The patients, all men between 29 and 41 years old, had suffered spinal cord injuries that left them with no sensation or movement in the legs.
All underwent surgery in 2020 to have the EES hardware implanted. The implants were paired with software that allows patients and physical therapists to set up semi-automated stimulation programs that enable a variety of movements. People can operate these programs themselves, via a tablet and small remote controls that communicate wirelessly with the pulse generator. Those three patients were able to stand and walk, with support, immediately after recovering from surgery.
The Swiss team has discovered something particularly intriguing along the way: Some of their nine patients have been able to walk even with the electrical stimulation turned off — suggesting, Azim said, a “reorganization” of neurons involved in walking.
To delve deeper, the researchers turned to lab mice to simulate many of the main features of EES in humans with spinal cord injuries. They were able to zero in on a group of neurons — called Vsx2 neurons — that appear “essential” for the recovery of walking with EES.
“Silencing” the neurons prevented lab mice from recovering their walking ability with EES; activating the neurons restored their movement.
“This study asked, what is going on in the spinal cord during stimulation?” Azim said. “That’s a big black box.”
Dr. Greg Nemunaitis, director of spinal cord injury rehabilitation at the Cleveland Clinic in Ohio, called the regained function in these nine patients “fantastic.”
He also said the discovery of “recovery-organizing neurons,” while in mice, is “a first step in understanding and enhancing function in humans until the ‘cure’ is found.”
By Amy Norton (HealthDay Reporter)