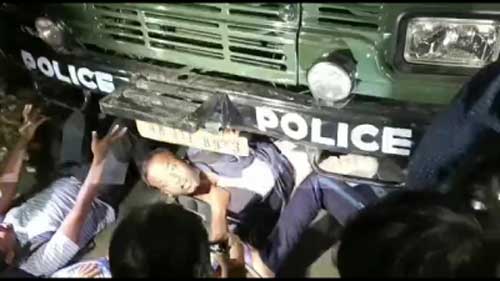 In a midnight development, a huge police contingent forcefully removed the protesters agitating in front of the West Bengal Board of Primary Education (WBBPE) office here against the alleged irregularities in the recruitment of primary teachers in the state.

Tension started mounting on Thursday evening after a huge police contingent arrived at the protest venue alerting the protesters to lift the sit-in and fast-unto-death agitation citing a Calcutta High Court single-judge bench order to maintain Section 144 of the Code of Criminal Procedure, 1973. Although, the court order had not directed the police to remove the protesters.

To avoid the imposition of Section 144, which prohibit the assembly of four or more people in an area, the protesters adopted an innovative way. They got scattered into small groups (less than four in each) and started protesting, maintaining a reasonable distance between two groups. In the meantime, the leaders of all the opposition parties including BJP, CPI(M) and Congress reached the spot expressing solidarity with the protesters.

In the face of the presence of the opposition leaders and a battery of media persons, the police contingent present there started showing signs of retracting for the day. However, suddenly at around 12.15 a.m. (Friday), the police contingent reached the spot again and started removing the protesters by dragging them over the streets. The agitators made a failed protest to resist and in the process some, including women, received major bruises.

Meanwhile, the leaders of the opposition parties again rushed to the spot and each of them cautioned of statewide protests against such a late-night police operation.

The office of the Calcutta High Court Chief Justice Prakash Srivastava, on late Thursday evening admitted the petition of counsels of the protesters challenging the single-judge bench order to maintain Section 144 on an emergency basis. The matter will be heard on Friday only.

The opposition leaders warned that from Friday there will be parallel battles on this development, the first being in the court and the second being on the streets.