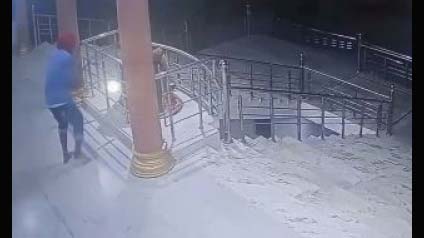 Tension eruoted in a village in Punjab’s Tarn Taran district located close to the India-Pakistan border on Wednesday after a group of miscreants vandalised a three-storeyed church and broke the statues of Mother Mary and Jesus Christ.

After keeping the security guard captive at gunpoint, the miscreants also set on fire to the pastor’s car.

Visuals of the car engulfing in flames and vandalisation of the statues were caught on CCTVs.

A person was caught on the camera repeatedly hitting the idol with a hammer.

A large number of people belonging to the community staged an indefinite sit-in protest at Thakkarpura village, the crime spot, demanding the arrest of the accused and security for the minority community.

The incident comes a day after the Akal Takht Jathedar, head of the highest temporal seat of the Sikhs, issued a statement against “forced conversions” by Christian missionaries.

“So-called Christian missionaries have been forcibly converting Sikhs through fraudulent practices. Sikhs and Hindus of Punjab are being misled and converted. This is happening right under the government’s nose. Though there are provisions in the law to book for superstitious practices in the name of religion, no government is ready to act against them (missionaries) due to vote bank politics,” Giani Harpreet Singh had said.

Two days earlier, a group of nihangs and their supporters disrupted an event organised by Christian missionaries at Daduana village in Amritsar.

After Vande Bharat, Modi asks Railways to come out with Vande Metro: Vaishnaw

Neuer considers leaving Bayern due to dismissal of goalkeeper coach