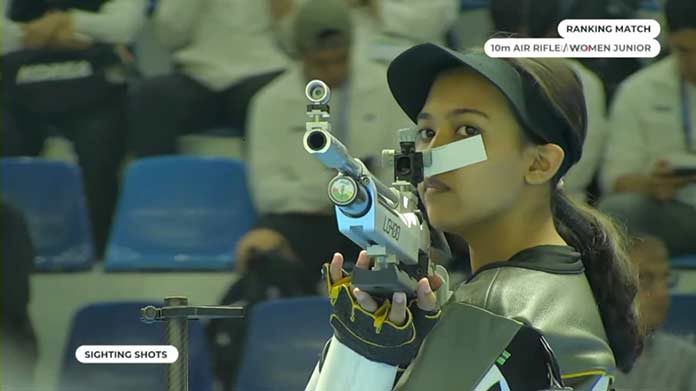 Tilottama Sen, from Nagaland, will be representing India at the 15th Asian Airgun Championship, Daegu, Korea to be held from November 8 to 19, 2022.
According to Nagaland Rifle Association, president, Merang Jamir, the 14-year-old, the youngest shooter in the Indian team is studying at Blue Bell Public School, Bangalore.
Sen daughter of Sujit Sen, who passed out from Pranab Vidyapith, West Yard Colony, Dimapur, was the granddaughter of late Sunil Kumar Sen, who was a prominent businessman and the proprietor of Popular Watch Co, Dimapur.
At the recently concluded 36th National Games 2022, she shot a brilliant score of 633.6 in the Women’s 10m Air Rifle Qualification Round which became the National Record, and finished second best to Olympian Elavenil Valarivan at the final round.
Tilottama also won gold medal in 10m Air Rifle Women Junior Team at the ISSF World Championships Cairo, Egypt 2022 defeating China and Finland. She was the best shooter scoring 633.4 in the qualification round equaling the junior world record and achieved bronze medal in 10M Air Rifle Women Junior Individual.