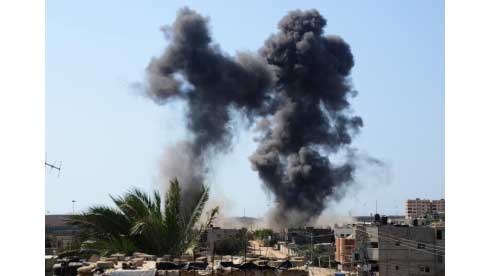 An Egypt-brokered ceasefire to halt a flare-up in fighting by Israel and Palestinian militants was holding on Monday, with crossings into the besieged Gaza Strip also reopening.

An Israeli army spokesperson said no new rockets had been fired at Israel from the Gaza Strip since the ceasefire to end three days of violence that Palestinians said left more than 40 dead took effect late Sunday, reports dpa news agency.

The Israeli army had not attacked any new targets in the coastal enclave, the spokesperson added.

Israel on Monday also announced the re-opening of border crossings into the Mediterranean coastal strip for humanitarian deliveries.

The Israeli military had launched the “Breaking Dawn” military operation on August 5 with airstrikes against Islamic Jihad in the Gaza Strip.

Two military chiefs were killed during the operation.

The group, closely linked to Iran, is classified as a terrorist organization by the US and European Union.

Israel Defense Forces said the group had been planning a major attack along the border involving anti-tank missiles and so pre-emptive action was taken by launching a wave of strikes against Islamic Jihad positions in Gaza.

Tensions began to rise with the arrest of an Islamic Jihad leader in the West Bank, Bassem Saadi, on August 1.

Since August 5, Palestinian militants have fired more than 1,000 rockets at Israeli settlements, according to the Israeli military, with some 200 hundred of them falling short and hitting the Gaza Strip.

In Gaza, 44 people have been killed and 360 injured, according to the Palestinian Health Ministry.

Among the dead were said to be 15 children and four women.

There have been no reported deaths in Israel, with the Iron Dome defence system intercepting most of the rockets.

After assessing the security situation, the Erez border crossing and the Kerem Shalom goods crossing were open again, Israel’s Coordination of Government Activities in the Territories (COGAT) announced Monday.

The first fuel tanks and humanitarian supplies passed through the border in the morning, according to a spokesperson.

The power supply in Gaza had been reduced from 12 to four hours on August 6 due to a lack of fuel. The Palestinian Health Ministry had warned of major impacts on medical services.

Around 2 million people live in very poor conditions in the territory on the Mediterranean Sea.

Hamas seized power in 2007, prompting Israel to tighten a blockade of Gaza, a move that is also supported by neighbouring Egypt.

Both Israel and Egypt justify the measure with security interests.

‘Assets will be used for our defence’: Ukraine sanctions Russian firms