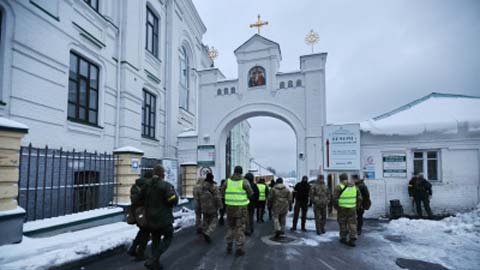 Since its foundation in 1051, the Kyiv-Pechersk Lavra has been a pre-eminent centre of Eastern Orthodox Christianity in Eastern Europe.

Also a Unesco World Heritage Site, the historic monastery split from the Moscow patriarchate after Russian launched its ongoing invasion of Ukraine on February 24.

In a statement on Tuesday, the Security Service of Ukraine (SSU) said: “These measures are being undertaken jointly with the National Police and the National Guards as part of the SSU’s systematic efforts to counter subversive activities of Russian special forces in Ukraine.

“There is a growing risk of terrorist attacks, sabotage, and hostage taking, especially in crowded places, in light of Russia’s military aggression.”

According to the SSU, the measures were also taken to prevent the historic site from being used as a “Russian world” centre; verify information that the premises are being used to conceal sabotage and reconnaissance groups and foreign citizens and to store weapons; and protect citizens from false-flag operations and terrorist attacks, Ukrayinska Pravda quoted the SSU statement as saying.

Tuesday’s raids come after Ukrainian authorities responded to complaints that the clergy had been glorifying Russia and could be in league with the Kremlin, the BBC reported.

A criminal inquiry was opened a week ago after a video emerged of pro-Russian propaganda being sung, referring to the awakening of ‘Mother Russia’.

Days later, the head of a diocese in the Vinnytsia area of central Ukraine was charged with preparing propaganda leaflets backing Russia’s invasion.

In response to the raids, Kremlin spokesman Dmitry Peskov said that “Ukraine is at war with the Russian Orthodox Church”.

In his condemnation of the incident, Kirill, Patriarch of the Russian Orthodox Church, he said it an “act of intimidation of believers”.