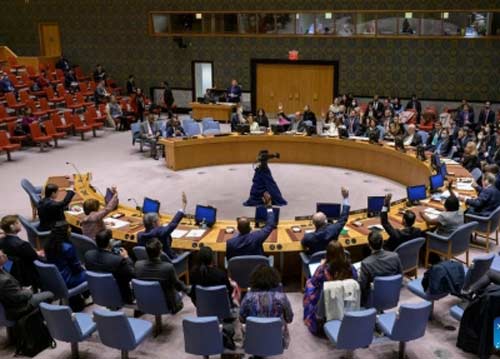 A UN Security Council resolution approved imposing sanctions on Haiti, targeting gang leaders and their financiers, in an effort to end months of violence and lawlessness.

It establishes a committee which will be responsible for designating the individuals and entities to be sanctioned.

Criminal gangs have been blocking access to the main fuel terminal in the capital Port-au-Prince, bringing critical services to a standstill, as Haiti grapples with a widening cholera epidemic, amid political and economic meltdown.

“Catastrophic” levels of hunger have been recorded this month for the first time, in the gang controlled Cite Soleil neighbourhood, and 4.7 million people are facing acute hunger, with many losing access to jobs, markets, health and nutrition services.

In specific, the resolution sanctions Jimmy Cherizier, a notorious gang leader known by his alias “Barbeque”, who is reportedly the country’s most powerful gang leader.

He heads the so-called “G9 Families and Allies”, and the annex notes that he has engaged in “acts that threaten the peace, security and stability of Haiti”, having planned or directed acts that amount to “serious human rights abuses”.

Sanctions include an assets freeze, travel ban and arms embargo, against those engaging in or supporting criminal activity and violence, involving armed groups and criminal networks.

As a matter of importance, the resolution also prohibits the obstruction of humanitarian assistance to and inside Haiti, as well as attacks against UN personnel and premises.

The Weeknd hints at new music for ‘Avatar: The Way of Water’ Soundtrack