Why does Bangladesh need Saudi Arabia’s investment in the power and energy sector urgently? 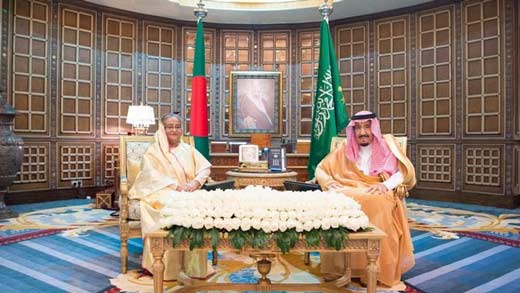 Apart from this, BPC also buys fuel oil through open tender. In other words, more than 80 percent of fuel oil is imported from Middle East countries including Saudi Arabia. Earlier in 2019, two agreements and four memorandums of understanding were signed with Saudi Arabia for the development of various sectors of Bangladesh, including the power and industrial sectors. These agreements and agreements were made in the presence of Prime Minister Sheikh Hasina in a ceremony organized at her office.
If these agreements are implemented, the country’s bilateral trade and investment with Bangladesh will increase. It is believed that both countries will benefit economically. Especially the ongoing crisis in the power and energy sector of the country will be removed. Besides, bilateral trade with Saudi Arabia also has great opportunities and possibilities.
In addition, Saudi Arabia’s state-owned oil company Aramco has already shown interest in building, operating and maintaining an oil refinery. It will cost 1.5 to 2 billion dollars. Saudi firm Engineering Dimension LLC is very enthusiastic about investing in Bangladesh.
The company is interested in investing in 7 projects and has pledged to invest around 1.685 billion dollars during the International Investment Conference held in Dhaka in November last year. Saudi Arabia’s investment in the power and energy sector is urgently needed at the moment. This issue should be given maximum emphasis in any forum discussion with the country.
Engineering Dimension is one of the companies that have shown interest in the construction of Dhaka East-West Elevated Expressway. Some Saudi investments are already in the pipeline. These include the development of Patenga Container Terminal with Red Sea Gateway Terminal in Public Private Partnership. Further Saudi investment will largely depend on how successfully the projects in the pipeline can be managed.
ACWA Power, an internationally renowned energy company, has expressed interest in investing around $600 million to build a 730 MW combined cycle power plant in Chittagong. Al-Fanar plans to invest $100 million to build a 100 MW IPP solar project in a joint venture. Al-Bawani is interested in investing about $10 million in the employment of skilled human resources for construction and engineering projects.
Bangladesh-Saudi Arabia joint commission meeting preparation.
Preparations for the 14th meeting of the Bangladesh-Saudi Arabia Joint Commission have started in full swing. The Economic Relations Department (ERD) of the Ministry of Finance prepared the working paper on behalf of Bangladesh. In the meeting to be held in Riyadh, Saudi Arabia on October 30-31, the cooperation of Saudi Arabia will be sought in the export of electricity, manpower, increasing the export of manufactured goods, export of halal products, especially fish and meat, export of agricultural processed products and fertilizer production.
Besides, Bangladesh has the opportunity to export clothes to other Middle East countries including Saudi Arabia. The entrepreneurs of the country’s garment sector have expressed their interest in this regard. Saudi Arabia will be requested to speedily implement the agreements made with Saudi Arabia at various times. In this context, Bangladesh has prepared for the Bangladesh-Saudi Arabia joint commission meeting.

Bangladesh has several bilateral trade investment agreements with Saudi Arabia. These agreements must be implemented now. It is reported that talks are going on between Petrobangla and Aramco regarding a liquefied natural gas (LNG) deal. This will solve the country’s LNG crisis. Besides, Eastern Refinery Unit-2 has sought Saudi Arabia’s cooperation in processing 3 million tons of crude palm oil per day.
If it is implemented, 68 thousand barrels of refined petroleum will be available. MoU will be signed between Bangladesh Power Development Board and world renowned ACWO Power. It is expected to make great progress in the renewable energy sector in the country. It has an agreement with Saudi Arabia to build a 100 MW Solar Independent Power Plant (IPP) and manufacture transformers and electrical components.
These agreements need to be implemented quickly. Meanwhile, 20 more Saudi Arabian companies have shown interest in investing in Bangladesh, said Foreign Minister Dr. AK Abdul Momen recently. After a recent meeting with a delegation of Saudi Arabia, he added, “We will give them all the facilities they need.” Both countries have much more to do in terms of trade and investment cooperation.
Besides, the country is also interested in investment on the basis of public-private partnership or PPP. Saudi Arabia will mainly invest in Bangladesh’s infrastructure, medical, tourism and other sectors. A memorandum of understanding has been signed with Saudi Arabia. Salman F Rahman, Adviser to the Prime Minister on Private Industry and Investment on behalf of Bangladesh, signed one such MoU a few months ago. However, countries of the Middle east especially Saudi Arabia’s investment in the power and energy sector is urgently needed at the moment.

UPSC to hold recruitment exam for Railways from 2023 onwards