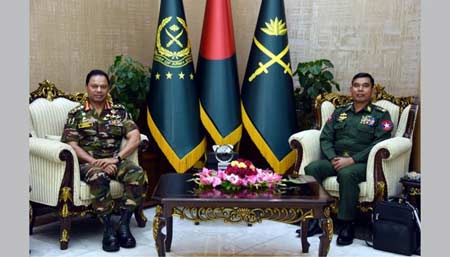 After mortars landed in Bangladesh during attacks against the Arakan Army (AA) in Rakhine State, border soldiers from Bangladesh and Myanmar’s junta promised to mend bilateral ties on Sunday.

The Rakhine region of Myanmar, which borders Bangladesh, has seen a number of airspace violations over the past few months as border guards there have fought domestic militants. Myanmar border guards have apologized to their counterparts in Bangladesh for these events.

A BGP delegation from Myanmar also promised that similar situations would not occur in the future. The commitments were made on Sunday (October 30) at a flag meeting with an eight-person team from the Border Guards Bangladesh, or BGB, in Cox’s Bazar.

Because of intermittent shelling from within Myanmar’s territory, residents of Bandarban’s Naikkhyangchhari Upazila along the Tumbru border have spent the previous three months constantly fearing for their lives.

Gunfire was frequently heard by residents close to the border, raising security worries. Multiple casualties were caused by some of the shells that crossed into Bangladesh from the other side of the border. On September 16, a mortar round exploded at a Rohingya camp near the border’s Zero Point, killing one kid and injuring five others.

Another young adult from Bangladesh was seriously hurt in a landmine explosion along the border the same day. Multiple occasions, fighter jets and helicopters with Myanmar military insignia violated Bangladesh’s sovereign airspace.

The Arakan Army, an insurgent group fighting for ethnic minorities’ right to self-determination in Rakhine state, which is also home to over a million Rohingya who have fled to Bangladesh, has reportedly erupted into a full-fledged armed battle with the Tatmadaw, the country’s military.

Bangladesh had strongly protested the violation of airspace and the landing of shells inside Bangladeshi territory. Bangladesh’s airspace was violated, which the Myanmar border guards lament. The BGP delegation responded by expressing apologies and making a commitment that similar instances won’t occur again.

Commander Lt Col Sheikh Khalid stated at a press briefing that “at the same time, the BGB and the BGP decided to collaborate on the border situation.” Additionally, he claimed that a number of topics, such as stopping drug trafficking and preventing Myanmar citizens from entering Bangladesh, were discussed during the meeting.

The seven-person BGP side, led by Col. Ye Wai Soe, said during the meeting that Bangladesh is now sheltering members of Myanmar’s separatist groups who have crossed the border and are committing crimes there.

The charges were vigorously refuted by the BGB side. “We told them [BGP] that no rebels had ever been permitted to exploit Bangladeshi land. However, Bangladesh does not and will not encourage terrorists, according to Lt. Col. Sheikh Khalid.

In a fresh turn of events, a three-person delegation from the Myanmar army met with the Bangladeshi army in Dhaka. The two sides talked about promoting regional security and stability as well as the prompt repatriation of the Rohingyas.

The Myanmar Army was reminded by the Bangladesh Army to exercise caution when undertaking any operations in the border regions.

The conference happens a few weeks after border tension erupted as a result of border violations committed by Myanmar during hostilities with the Arakan Army, an armed rebel organization in Rakhine State. Bangladesh repeatedly summoned the Myanmar ambassador in Dhaka.

Approximately 750,000 Rohingyas fled to Bangladesh in 2017 as a result of a military crackdown on them, and this occurred more than five years later. Not one Rohingya traveled back to Myanmar.

The Myanmar delegation provided information about the situation in Myanmar and stated that they are working to keep order and peace in their nation at the meeting between the two forces.

The commander of the Bangladesh Army, SM Shafiuddin, urged the Myanmar delegation to cooperate for regional security and discussed ways to strengthen ties between the two militaries, as well as collaborative discussions, training exchanges, coordinated disaster management, and information sharing.

The Rohingya crisis and their protracted presence in Bangladesh, he claimed, may pose security risks. He emphasized the need for the Rohingya to return home quickly in order to avoid similar difficulties in the future.

The Myanmar delegation expressed willingness in improving relations and communication with Bangladesh as well as resolving issues on a bilateral basis.

The team then paid Lt Gen Ataul Hakim Sarwar Hasan, the chief of general staff of the Bangladeshi army, a courtesy visit. Sarwar Hasan discussed, among other things, the two militaries’ training exchange, quality improvement, and collaboration on disaster management.

He urged the Myanmar army to exercise greater caution when conducting operations in the border regions. Terrorists, he continued, do not work for any nation.

The military training of the two nations was compared, and Lt Gen Ataul Hakim Sarwar Hasan predicted that the border guards of the two nations would cooperate to uphold peace. The meeting between the two forces is anticipated to help relations, according to the media reports.

Myanmar is one of Bangladesh’s closest neighbors, and the two countries have had a long-standing relationship dating back generations. The 271-kilometer Bangladesh-Myanmar border is strategically significant for Bangladesh, despite the fact that it is militarized due to Myanmar’s continuous internal strife. Bangladesh might establish routes through Myanmar to access China to the east and other Southeast Asian countries to the south if this issue is resolved.

Relations between Bangladesh and Myanmar were formalized on January 13, 1972, when Myanmar, as the sixth state, recognized Bangladesh as an independent entity. However, due to the presence of several unresolved issues such as Rohingya refugees and maritime border demarcation, the scene has changed in an unfavorable way, and ties between these two neighbors have not always been as friendly as envisioned.

Apart from India, Myanmar is the only other country on our border. It has the potential to provide Bangladesh with strategic benefits. It could be the starting point for a land-based alternative to the maritime route to China and Southeast Asia. Such a road link has the potential to expand Bangladesh’s communication network with Southeast Asian countries such as Thailand, Malaysia, and Singapore. Myanmar is also a country with a lot of promise, thanks to its abundant natural resources. Myanmar’s forests and natural resources, such as gas, oil, and stones, are vast, and Bangladesh can considerably benefit from them. As a result, maintaining good relations with Myanmar is more in Bangladesh’s interest for reasons of national security.

Military diplomacy in the twenty-first century goes beyond traditional notions of war and peace. As previously said, as members of multilateral forums, Bangladesh and Myanmar have opportunities to strengthen military ties in the face of common dangers.

Myanmar and Bangladesh have a lot of potential in their bilateral relationship. There are a lot of areas where the two countries may collaborate and work together, the most important of which is the upgrading of existing military and commercial connections, which are now in poor form. But military diplomacy in the perspective of defense cooperation can help strengthen the bilateral ties with a neighborly spirit and solve the bilateral problems such as Rohingya refugee crisis.

Terrorism and transnational crime are two of BIMSTEC’s key concerns, both of which are impossible for member governments to combat on their own. Over time, the nature of terrorism and militancy has also changed. Cyber risks are more important than ever before in the digital age. This type of fighting in the sovereign space necessitates strong intelligence exchange and capacity building, which can be eased by combining the two countries’ military skills.

Cross-border arms trade, as well as unlawful human and drug trafficking, will be hampered by institutional collaboration in this area Furthermore, high-level delegations would encourage bilateral negotiations aimed at overcoming previous impasses and providing UN peacekeeping deployments with capacity-building opportunities.

The military cooperation between Myanmar and Bangladesh has a lot of promise. There are several areas where the two countries may engage and work together, with the most essential being the improvement of relations.

Bangladesh and Myanmar have exchanged military delegations, which could pave the path for the two nations to address their bilateral issues. To address certain common bilateral concerns, both sides might collaborate and share their knowledge and expertise. Military training exchanges between the two-armed forces can benefit both sides in terms of improving operational capabilities. Combined military exercises, UN peacekeeping operation (UNPKO) training, and disaster management cooperation, as well as exchanging programs, senior-level visits, and medical cooperation, sports events, adventure activities, military tourism, joint cycling expeditions, and adventure training, are some examples of sectors of cooperation.

The united efforts of the two states may pave the way for closer connections between the two neighbors. Improved military ties between Bangladesh and Myanmar can aid in the smoothing of ties and the resolution of long-standing issues such as the Rohingya crisis, maritime disputes, and border-related trans-border crimes Both forces from Myanmar and Bangladesh should exchange visits, training, and joint exercises on a regular basis.  These will aid in the reduction of mistrust and the promotion of trust and understanding.

This could also help to resolve the region’s long-standing Rohingya refugee crisis.

The two countries’ relations are based on cross-border dialogue between ordinary people on both sides of the border between Bangladesh and Myanmar. The most effective strategy to progress together and maintain a peaceful relationship between the concerned countries is to establish a people-to-people connection between two sovereign countries. This is especially essential when the countries in question are neighbors. The people of Bangladesh and Myanmar must have a harmonious and thriving relationship. Both militaries can essentially promote trade and commerce with one another.

Myanmar’s military should do everything possible to strengthen ties. It must recognize Bangladesh as a peaceful country with friendly neighbors. Bangladesh adheres to the concept of peaceful coexistence.

As a result, engaging with Bangladesh would benefit Myanmar as well. Military relations between the two neighboring countries can provide peace, harmony, regional stability, increased regional interest, and other benefits throughout the region (South Asia and Southeast Asia).