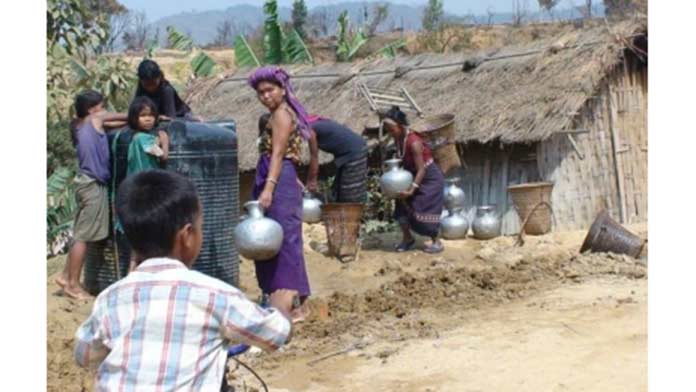 The Young Mizo Association (YMA), the largest and most influential civil society organisation in Mizoram, has urged the state government to set up suitable relief camps in a compact area for nearly 30,500 Myanmar nationals, who took shelter in the state after the military seized power through a coup in the neighbouring country in February last year.
The YMA’s demand to set up proper relief camps in a defined area is significant in view of the reports of rising crimes committed by Myanmar nationals in the northeastern state, which shares a 510km unfenced border with the adjoining country.
As per official records, majority of nearly 30,500 Myanmar refugees, including 11,798 children and 10,047 women, are sheltered in more than 156 camps in all the 11 districts in Mizoram while a large number of them took shelter in the relatives’ houses, community, centres, rented houses, government buildings and shelter houses set up by various NGOs, including the YMA.
The Mizoram government officials said that considering the small size of the state, construction of relief camps in a specific compact area is administratively and strategically not practical as it would lead to many problems, including law and order.
The YMA General Secretary, Lalnuntluanga said that the organisation during a general conference held on Thursday adopted a resolution to approach the state government for the establishment of proper and compact relief camps for the Myanmar refugees to avoid their scattered living across the state.
He added that the delegates in the conference have observed that currently the Myanmar nationals are being kept and scattered in various relief camps, villages and different houses in all parts of the state and these might create serious problems in near future.
The Assam Rifles, which guarded the porous India-Myanmar border, has also expressed concern about the increasing number of crimes, including smuggling by Myanmar nationals.
Assam Rifles officials said that they apprehended 35 Myanmar nationals this year in various anti-smuggling operations while Mizoram police also arrested many Myanmarese for their involvement in illicit trade.
To deal with the situation, Assam Rifles Inspector General (East), Major General V.K. Nambiar recently held a first ever conclave with the influential NGOs of Mizoram, including YMA and requested them to be proactive to curb the rising illegal activities involving Myanmar nationals.
An Assam Rifles official said that various avenues of cooperation between the armed forces and common people were highlighted in the conclave which also expressed concern on the recent increasing trends of smuggling of narcotics which adversely affects the livelihood of the locals.
There were several instance of crimes, including murder and buglary, committed by the Myanmar nationals in remote villages. Inappropriate activities of the Myanmar people might create misunderstanding with the local residents in the future, the official added.
The state government recently issued orders asking the Myanmar nationals not to purchase land, house and run businesses in the state following reports of shops being set up by the Myanmar nationals in some villages.

SourceIANS
Previous article
Police yet to identify miscreants involved in violence at Shillong rally
Next article
India stands with S Korea during this difficult time: EAM
Must Read