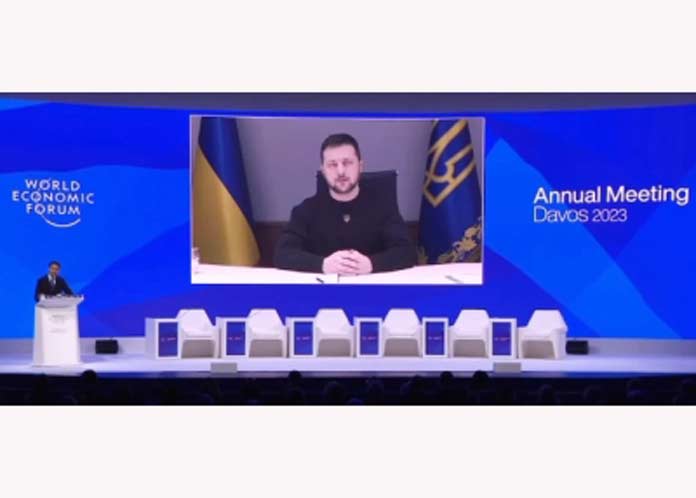 In his virtual address to the World Economic Forum in Davos, Ukrainian President Volodymyr Zelensky has called on the world to act faster and more decisively in an effort to prevent new Russian attacks on his war-torn nation.

While addressing the ‘Restoring Security and Peace’ session in English on Wednesday, the President said: “Three years ago, I participated in the World Economic Forum for the first time. It was the time when the world was fighting Covid-19. It fought and won.

“Now the world is fighting against (Russian President Vladimir) Putin. And in three years, we will be discussing new challenges and threats in Davos. What will it mean? It will mean we will definitely overcome the current threat.

“History repeats itself. At first, the world either fails to notice or underestimates a threat. Then it unites to resist it. And then the world wins. Every time, the same outcome occurs.

Zelensky then went on to mention the tragedy on Wednesday in Brovary city, where 14 people, including Interior Minister Denys Monastyrsky, died in a helicopter crash, reports Ukrayinska Pravda.

The participants of the session observed a minute of silence in memory of all those whom Ukraine lost during the almost 11 months of the war.

The President emphasised that Ukraine has experienced thousands of such minutes, “including three minutes on January 14. Three minutes is the time it took for the Russian missile to travel hundreds of kilometres, hit a residential block in Dnipro and kill at least 45 people”.

The President added that “the world can’t keep up with changes and challenges”.

“Russia needed less than one second to start the war. The world needed days to react with its first round of sanctions. The time the free world uses to think is used by the terrorist state to kill.

“It is not only Ukraine; the whole world needs exactly this pace of decisions and actions,” he added.

“The world must not hesitate today and ever,” stressed the President.

“When evil seeks revenge, the world needs resolve and speed.”